Researching and Responding to Barriers to Prisoner Reentry 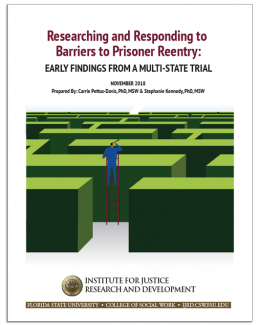 This report describes the inner workings and early discoveries of participants and researchers in a groundbreaking longitudinal study currently occurring in four states, 50 prisons, 12 urban and rural counties with more than 1800 people enrolled since May 2018. The study, officially titled A Multisite Randomized Controlled Trial of the 5 Key Model for Reentry, is research that is occurring as a part of a larger initiative referred to as the Safe Streets and Second Chances initiative. This report is the first of many that invites stakeholders and the general public to watch the experiment unfold in real time – representing a revolutionary approach to research and evidence driven reentry reform.